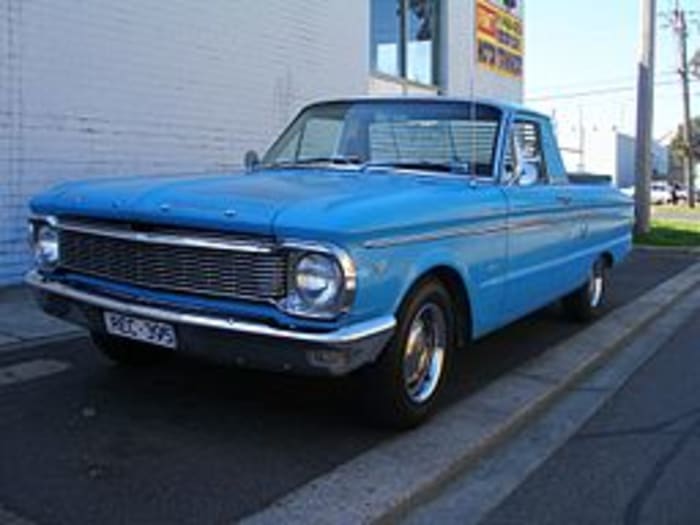 1925 The first series production ute was the 1925 Ford Model T. This vehicle had a two-seat body, with canvas hood and a wooden, stake-side body, on top of heavier-rated rear springs.
1933 A Gippsland farmer's wife writes a letter to Ford Australia, asking: “Can you build me a vehicle that we can use to go to church in on Sunday, without getting wet, and that my husband can use to take the pigs to market on Monday?” Lew Bandt, a young designer at Ford’s Geelong plant, modified a 1933 coupe, by building a tray on the back and strengthening the chassis so that it would carry a load. The prototype was approved and the Ford Australia ute went into production in 1934.
1951 Australian’s ‘most loved’ ute, the 1951 Holden coupé utility, goes into production. Nicknamed FX, it’s a great performer and cheaper than any of its rivals. The waiting list is around 70,000 in its first year.
1961 Ford brings its coupe-utility game to the next level with a ute variant of the Falcon XK sedan. The Ford/Holden battle is on.
1968 Toyota launches its Hilux, and begins its inexorable domination of the ute market.
2004 In the height of Ford and Holden’s popularity, the manufacturers sold more than 40,000 Australian-made utes between them.
2011 On April Fools' Day 2011, BMW announces the BMW M3 ute. Although not a joke, the model based on the E93 Convertible, is created by BMW's M Division as a one-off workshop transport vehicle for use within the company. Image credit Dr. Keats