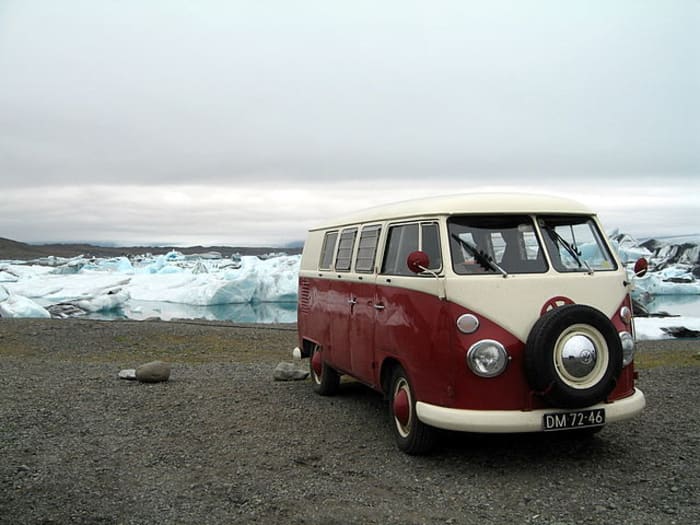 A VW Camper at Jokulsarlon Glacier Lagoon, Iceland 1935 – William Stout invents “the Scarab”, a mobile office where one could be driven and work at the same time, however only nine examples were ever produced: it was considered too radical for its time. 1947 – It’s a long 12 years before Dutch Volkswagen importer Ben Pon doodles the first ever sketch of the VW Kombi, although production would wait another two years. 1949 – The first-ever Kombi van finally rolls off the assembly line on 12 November, with a 1.5 tonne capacity and iconic “v”-split windshield and roofline to assist with aerodynamics. 1960 – American auto manufacturers fall in love with this new shape: the Ford Falcon, Dodge A100, Chevrolet and especially the Corvair rear-mounted, air-cooled engine entry all borrowed from VW’s excellent design. 1969 – Scooby Doo and the gang zooms onto the screen in the ever-green and transformative Mystery Machine, thought to be based on the Chevrolet Sportsvan. 1970s – Songs like Sammy Johnn’ Chevy Van, and nicknames like “sin bin”, enter the cultural lexicon as owners transform their vans into rolling bedrooms and lounges. 1980s – Conversions vans become de riguer, initially with plush accommodation – think thickly padded seats, wood trim and mood lighting – but also extra seats (family and shuttle vans), platform lifts (wheelchair vans) and even bolted desks and chairs for travelling salesmen and TV crews. 1990 – The Volkswagen Transporter dramatically updates VW’s van line by using a front-mounted, front-wheel drive and a water-cooled engine, taking the shape of the modern van. 2001 – A courier company rejects Tim Bishop and his old hippie van. Today, his Melbourne based business, A Man With a Van, moves over 30,000 homes a year. 2013 – VW builds its final Kombi van, bringing to an end the longest continuous automotive production in history.